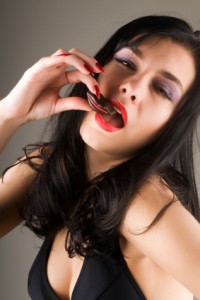 People have varying opinions about sex.

One fact that most people will agree on is that it can be as multifaceted as the Hungarian Rubik’s Cube puzzle.

Just when you think you’ve got it figured out and about to align all the colors to perfection, you make a wrong twist and have to start all over again.

Here are a few fun facts about sex that you may find interesting.

The condom was originally made of linen and was invented in the 16th century.

The linen sheaths were doused in a chemical solution and allowed to dry.

Upon drying, the linen was placed on the head of the penis and supported by a piece of ribbon.

People who engage in energetic sex for a half hour burn close to 200 calories.

If they regularly engage in energetic sex throughout the year, they could lose as much as 5 pounds.

Talk about a great workout.

Due to the orgasm that it induced in women, doctor’s were able to cure or lessen the amount of anxiety attacks that these women had.

According to Playboy Magazine, more women enjoy talking dirty to men during sex than men.

Experts attribute this to the fact that women are more auditory than men, while men are more visual.

Talking dirty helps women become increasingly aroused during the process and can increase the chances of her experiencing orgasms.

On average, ejaculate moves at a rate of 28 miles per hour upon exit.

The average man will ejaculate about 18 quarts of semen during his lifetime.

This is equivalent to 72 cups.

A worldwide survey conducted in 2007 concluded that the average age for those who have sex for the first time is 19.25 years.

In Western societies, this number was a little lower at 18 years.

However, the late teens seems to be a prevalent average across most societies, cultures and demographics.

Chocolate releases a chemical called Phenylethylamine. This is the same chemical that is released during sex.

Many experts believe that consuming chocolate may actually be more effective for causing arousal than the act of foreplay itself.

In a survey, a significant number of women stated that they preferred the effects of eating chocolate than the act of sex itself.

The average male produces hundreds of millions of sperm each day.

Upon ejaculation, a man can release as many as 600 million sperm at one time.

Females on the other hand are born with a certain number of eggs that cannot be exceeded throughout her lifetime.

The Origins of the Term “Blow Job”

The term “blow job” was conceived during Victorian Times.

Sex on the Brain

Boys will be boys.

The adult male thinks about sex every 7 seconds.

That’s a lot of time spent during the day thinking about sex.

The rate of growth of pubic hair is controlled by an internal growth program.

This program allows pubic hair to grow for a shorter duration of time than hair on the head or other parts of the body.

This is why pubic hair typically doesn’t grow too long in length.

The average size of an unaroused male penis is about 3 inches.

The average size of an erect male penis is about 5.5 inches.

However, the male ego may beg to differ.

When sperm dries up, it leaves a useful residue of protein that can help fight wrinkles by tautening the skin.

This would be a great remedy for those who want to maintain the youthful look as long as they are willing to walk around all day wearing sperm.

That may be a little challenging.

The experts surmise that about 1% of the world population consider themselves to be asexual, meaning that these people aren’t attracted to either sex.

These may be the lucky ones. They don’t have to draw any conclusions as to the mechanics of sex.

The concept alone is alien to them.