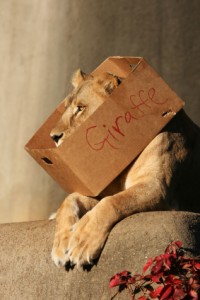 On Halloween, Billy and Jennifer, who both met on an online dating site, decide to attend a midnight costume-only Halloween party.

It is an animal-themed Halloween party called, “Ferocious.”

At the entrance, the doorman gives Jennifer the pass but stops Billy.

“Sorry, this is a Halloween party about carnivores. Carnivores that are Man-Eaters. Your costume is not acceptable.”

“But, I thought we could dress up as any animal,” Billy argues.

“Weren’t you paying attention? The party is called ‘Ferocious.’ There isn’t anything ferocious about a giraffe. You will have to find another costume.”

“But it’s midnight and all the stores are closed,” Billy responds.

The doorman shrugs his shoulders and says, “That’s too bad. I’ll tell you what. If you can bring a real, live man-eater over here, I’ll let you pass. It’s gotta be on a leash though.”

“How on earth am I supposed to do that?” Billy says, frustrated. “What do you expect me to do? Beam myself over to Africa, grab a tiger and beam myself back here?”

Shrugging his shoulders, the doorman responds, “Actually, my ex-wife should be enough. She lives around the corner.”