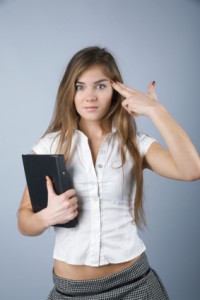 Ben, a single man, notices an attractive woman at the philosophy section of a library.

She is reading a book about the famous philosopher Friedrich Nietzsche and he can tell that she is really engrossed.

Quickly, Ben starts trying to remember all the cramming he did in high school on Friedrich Nietzsche.

“He who has a why to live can bear almost any how,” Ben quotes to her from memory.

The attractive woman turns and looks at him.

“To live is to suffer, to survive is to find some meaning in the suffering,” Ben quotes again from memory.

He has her undivided attention now.

“That which does not kill us makes us stronger,” Ben quotes.

“Are you a fan of Nietzsche’s?” she asks.

She quotes, ” ‘Ah women. They make the highs higher and the lows more frequent.’ ”

He quotes, ” ‘He who would learn to fly one day must learn to stand and walk and run and climb and dance; one cannot fly into flying.'”

She quotes, ” ‘If a woman possesses manly virtues one should run away from her; and if she does not possess them she runs away from herself.’ ”

About to state another quote, Ben stops. He notices the look of disapproval on her face.