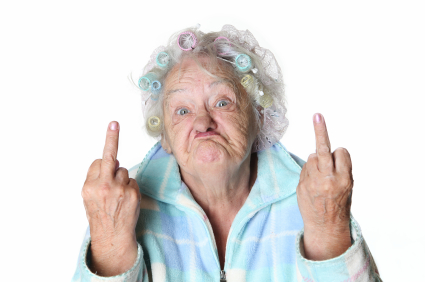 Jake and Ellen, a young couple, have been planning a weekend away for some time.

Finally, that time has arrived and they will be traveling to a secluded cabin for the weekend.

En route, the truck stalls and Jake pulls over to the side of the road.

He cannot figure out why the truck stalled and is frustrated that the weekend is about to be ruined.

An older couple in their 70s drive by in a Crown Victoria and stop.

They offer to give them a ride to the closest gas station.

They arrive at the gas station and both Jake and Ellen go in to see about getting some help.

The sweet older couple decide to hang around a little longer just to make sure the young couple are alright.

As Jake describes the look of his vehicle, the gas station attendant points outside.

Slowly moving by the gas station is his truck, except, Jake isn’t in it.

Jake runs back to the older couple who are waiting in their car. “He is stealing my truck, we need to go after him.”

The old man who wore dentures could barely speak.

“I said we need to go after him!” Jake yells.

Old man looks at him like he doesn’t quite understand what Jake is saying. Frustrated, Jake grabs the old man and hurls him out of the car.

After jumping into the driver’s seat, the poor old woman looks at him from the passenger seat unable to find her voice.

Not long after, Jake returns to the station in a happy mood. “It was the spark plug. Can you believe it? I can’t believe I missed that.”

Jake laughed at himself.

“Anyway, the guy who took my truck really wasn’t that bad of a guy. He just got out of the state penitentiary, saw my truck on the side of the road and figured he’d grab a ride. He didn’t mean to cause anyone any trouble. He gave me back the truck without incident and took the Crown Victoria instead. Anyway, are you ready baby? Let’s get this weekend going.”

Ellen, who had been treating the poor old man’s slight bruises could not believe what she heard.

That was when she noticed something far worse than all the insults brewing in her head.

“Jake, where is Ms. Henderson?”

Jake shrugs his shoulders and says, “Walking back.”

“She didn’t want a ride. I guess she is upset with me for some reason.”