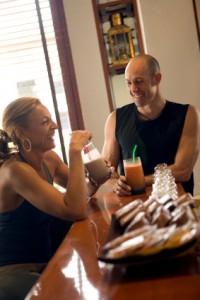 After having noticed beautiful Rhonda at the gym several times, Jim, who is single, decides that he will take the initiative and ask her out.

To his absolute delight, she agrees.

They agree to stop by a juice bar after their work-out and talk.

While there, Rhonda opens up to him.

She tells him sincerely that she doesn’t know why guys tend to ignore her and never ask her out.

Jim says, “I find it hard to believe that a woman as beautiful as yourself is ignored and never asked out by guys.”

Rhonda says, “Why do men assume that just because a woman is beautiful she has a line of men just waiting to ask her out?”

Waiting outside the juice bar, a man asks another man standing in front of him, “What’s going on? Can you see anything?”

“Yeah, she is still talking to that chump. We are going to be in this line for a good long while.”