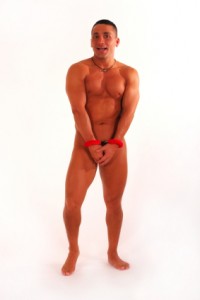 An attractive man named Johnny is at the post office.

He is about to send a heavy package to his long distance girlfriend when he is told that he is three stamps short. Unfortunately, he doesn’t have the luxury of time.

In order for the package to arrive in time for his long distance girlfriend’s birthday, it has to be sent today.

Unfortunately, he doesn’t have enough money for extra stamps at this time and the mailman is unwilling to help him.

Johnny turns to the line behind him. “Can anyone spare three stamps?”

Finally, a woman at the end of the line says, “I’ll give you one stamp if you take off your shirt.”

Johnny takes off his shirt.

Another woman in the line yells, “I’ll give you one stamp if you take off your trousers.”

Johnny takes off his trousers.

Another woman in the line yells, “I’ll give you one stamp if you…”

Johnny turns to the mailman behind the counter. The mailman, holding a book of stamps, says, “These are complimentary.”