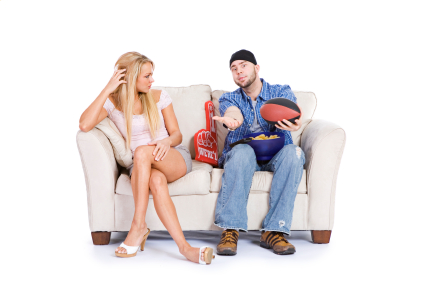 Dating can be as joyful as it can be complicated.

Connie has been complaining that Bill spends more time with his friends than with her.

To prove his devotion to her, Bill decides to spend a quiet evening with her and miss out on watching a very important football game with his friends.

At her apartment, Bill asks her if she wouldn’t mind grabbing a beverage from her kitchen.

When she leaves, Bill is unable to control himself.

He quickly turns on the TV in order to catch some of the game and puts the volume on mute so that Connie can’t hear it from the kitchen.

His team is behind.

He hears Connie coming back from the kitchen and quickly turns the TV off.

Not long after she returns, he asks her if she wouldn’t mind getting him a napkin.

Connie agrees and leaves to the kitchen.

Bill puts the TV back on, his team has just equalized the game.

He hears her coming back and turns off the TV.

Soon after, he asks her if she wouldn’t mind getting him some ice for his soda.

Connie agrees and leaves for the kitchen.

Bill puts the TV back on.

The game is still tied with a few precious seconds left and the opposing team has the ball.

As Connie returns with the napkin, Bill shuts the TV off.

Soon after, he is about to ask her for another favor when she raises her hand and says, “While I was in the kitchen I received a text message from a friend. Your team lost. Now, can we get on with our evening?”