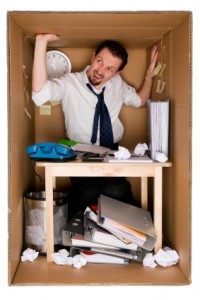 After working hard and reaching an executive position at his workplace, Frank, a single man, finally decides that he has had enough of the stress and puts in his 2 Week Notice.

He wants to have more time on his hands to find a mate, perhaps even try online dating.

Feeling like he has nothing to lose, Frank asks out a female coworker that he has always admired.

He is pleasantly stunned when she agrees.

Over a dinner date she tells him that she truly admires his hard work ethic.

She tells him that she only has eyes for men who work their way to the top and he is exactly that type of man.

Wanting to see her again and realizing that he has made a big mistake, Frank goes to work the next day and says that he wants to keep his job and retract the 2 Week Notice.

His boss tells him that they have already given the position to someone else.

Frank is distraught and tells his boss that he will do anything to get his old position back.

That same day, Elaine sees him in the lobby.

“Hey Frank, what are you doing?’ Elaine asks.

Putting the wet mop back into its bucket, Frank replies, “Working my way back up the corporate ladder.”