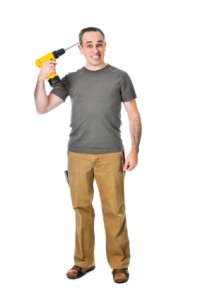 Tina particularly has a liking and attraction for men who are good with their hands.

She notices that Fred describes himself as a handy-man in his online dating profile.

They meet for the first time for dinner.

They truly look like the hands of a handy-man.

“Fred, do you mind coming over and helping me with my kitchen faucet. I think it broke.”

He comes over and fixes the faucet.

“Fred, I hope I am not being a bother but do you mind helping me fix the garage door. It doesn’t seem to be working when I try to open it.”

He comes over and fixes it.

A few days later, Tina calls Fred. “Now, don’t hate me, but do you mind coming over and fixing the roof. It has a leak?”

“Sure, it would be my pleasure Tina,” Fred responds.

He comes over and fixes the leak in the roof.

A few days later, Fred calls Tina. “Hey Tina, would you like to go out this weekend?”

“I would love to Fred but unfortunately I can’t. At least, not for a while,” Tina replies.

Disappointed, Fred asks, “Is there a problem?”

“Well, my husband is coming back from a year long deployment. I had to make sure everything in the house was fixed. You know these soldier types. Picky, picky, picky.”