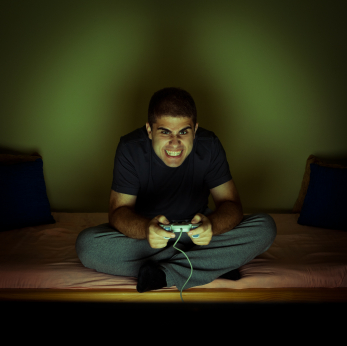 Giving up playing video games was hard for Gary.

However, he did it in order to give his girlfriend Yolanda, his undivided attention.

It’s been several months and Yolanda has truly appreciated all of the attention that he has been lavishing on her.

With his upcoming birthday approaching, Yolanda wants to reward him.

She buys him the most recently released video game called Force Warrior.

When she presents him with the gift, he is overjoyed.

She tries to get his attention hours later but he is completely involved in the game and barely acknowledges her when she leaves.

The next day she arrives at his apartment.

There are empty plates of food and empty cans of caffeinated soda everywhere but no sign of him.

She cleans out the mess, sits on the couch and puts on the TV.

A male anchor reports, “In other news, a local resident has built a tent outside a downtown shopping district. When asked why, the local resident replied that he is waiting for the release of Force Warrior 2.”