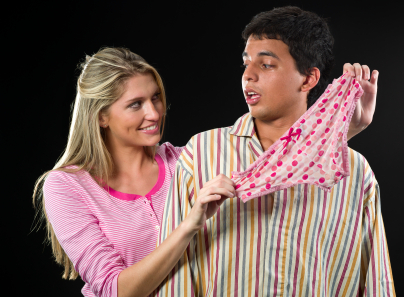 A single man has accidentally locked himself out of his apartment.

It is midnight and he is in his pajamas.

He knocks on his neighbor’s door and asks if he can spend the night as he has locked himself out of his apartment.

The neighbor, a male, says no and slams the door in his face.

He proceeds to knock on another neighbor’s door.

He makes the same request.

The neighbor, a male, says no and slams the door in his face.

With no success, he finally reaches the last door at the end of the hallway.

He tells her that he is a neighbor, explains the situation and makes the same request.

She puts her hands on her hips defiantly and says, “Do I have the words ‘dumb and naive’ written on my forehead?”

Disappointed, the male drops his head and says, “No, you don’t.”

Relieved, she smiles and says, “Come right in.”